The Unique Inclined Tricycles of Pagadian

Let’s talk about unique transportation, hilly terrain, colorful tricycles, fun, adventure and a once-in-a –life-time tricycle ride. Let’s talk about Pagadian! I have to admit that I should have been here earlier than my current visit should it not been for a very important trip I can’t forego. […]

Dipolog’s Cathedral of Our Lady of the Most Holy Rosary

What made me curious about Dipolog Cathedral is the fact that the main altar is designed by Dr. Jose Rizal at the time he was exiled in Dapitan. The Cathedral was built in 1896 but has been restored and renovated in the 70s. Despite however the restoration and […]

I have come to love lakes after I have seen Lake Apo in Bukidnon. Today, I am going to Lake Bulusan – one of the three lakes in Bulusan Volcano Natural Park in Sorsogon province. Lake Bulusan has been described as the “Switzerland of the Orient” because of […]

Ngong Ping Cable car ride is perhaps the best way to experience Lantau Island and its surroundings. From the Cable Car Station in Tung Chung (this is also the end of the MTR line), one will be transported through the cable car for about 20 minutes until the […]

Tai-o is a traditional fishing village located in the river banks of Lantau Island, Hong Kong. Tai-o is a popular tourist destination because it is known as the “Venice of Hong Kong” and despite the 2000 fire that destroyed the river village, most of the stilt houses are […]

My stay in Avenue of Stars is not complete until I see the night falling and until the permanent light and sound show is finished. I normally come here at 3PM and stay until 9PM just hanging around. If I get hungry, there are several stalls here selling […]

Hong Kong’s Avenue of Stars Before the Night Falls

Star’s Avenue or Avenue of Stars is perhaps one of the most popular place to unwind (for free) in Tsim Sha Tsui. Star’s Avenue gives a perfect view of Victoria Harbour and the nearby Hong Kong Island. Every time I am in Hong Kong, I never fail to […]

A must-see in Surigao City is the very unique Mabua Pebble Beach. The Mabua Pebble Beach is almost a kilometer long and is distinct because of its unusual characteristics.  I usually thought that an awesome beach is one that has fine white sand, pink fine sand, sugar-like sand […]

The ATV tour leads to the Lava Front of Mayon Volcano. This lava wall was due to the 2006 eruption of the volcano. It is estimated that there are 26 billions of lava in this wall. The lava wall used to be a coconut plantation before the eruption. […]

It was not among my plans to visit this water falls located in Bayugan City, Agusan Del Sur. And since I do not have much thing to do that day except to go to San Franz and sleep there for the night, I decided to drop by Bayugan […]

The Fruit I found in Fallel is called “Mariba”

It was my first time to see this kind of fruit called “Mariba” by the T’boli people in the mountains of Fallel in Sarangani Province. It looks like an “atis” – the Filipino term for sugar apple only that the spikes are larger, the pulp is bigger and […]

Lake Sebu is a municipality in the province of South Cotabato.  It is famous for its 3 beautiful lakes and 7 gorgeous waterfalls all set in a perfect and unadulterated environment in the home of the T’boli people. To get here, fly to General Santos City. From General […]

One popular thing to do while at the lava front of Mayon Volcano is to try the 300 meter zipline. The zipline starts at the lava wall (the lava that came out in the 2006 eruption) and ends at the base camp. Though not designed for the more […]

I visited Peninsula De Punta Fuego upon invitation for an ocular. The property is located in Nasugbu, Batangas which is morethan 2 hours away from Manila via Tagaytay scenic route.  The property is being managed by Fuego Properties – the same company that manages Pearl Farm in Davao […]

One interesting find in the mountains of Sagada is the Lemon Pie of Sagada Lemon House. The pie oozes with naturally tangy flavor is available at 25.00 per slice. The Lemon House also offers other varieties of pie like Blueberry Pie and Egg Pie.  They are open until […] 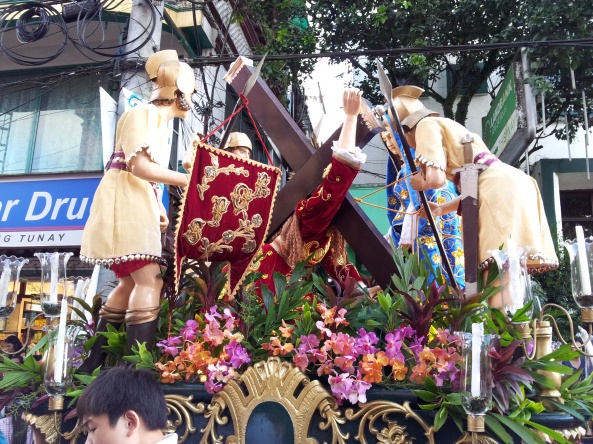 For the past 7 years, I have been attending Good Friday celebrations in Lucban, Quezon.  I am not from this place but it has become my yearly devotion to be here because of the not-so-commercialized celebration. It is simple yet grand. It is crowded yet solemn. It is […]

The Colors of Pahiyas De Lucban

Lucban is synonymous to Pahiyas – a yearly festivity for a bountiful harvest.  The Pahiyas is celebrated during the feast day of St. Isidore – the Patron Saint of Farmers.  This celebration is a thanksgiving event for last year’s bountiful harvest and an offering for next year’s harvest. […]